Dutch exports are growing at a rapid pace in the first half year (HY1) of 2017. This post highlights the most interesting developments, by comparing HY 1 of 2017 with the same period in 2016.

Overall Dutch exports grew by 12%, corresponding to a 25,5 billion euro higher export revenue in HY 1 2017 compared to the same period a year ago. This is a solid growth rate. Exports to EU countries increased by 9% (14,1 billion euro), to non-EU countries a lot more: 20% (11.4 billion euro). Remarkable is the higher growth towards non-EU countries. The table below provides export growth data on some of the most interesting countries.

The growth of Taiwan and South Korea is very interesting, also because in absolute euro terms it is substantial. The increase of exports to the Russian Federation is very remarkable, as there is a boycott in place on the export of many goods to this country. In euro terms the export grew the most to the neighbouring countries Germany and Belgium. This is in line with regular trade patterns, in which countries usually trade the most with their neighbours.

The overall export growth of 25,5 billion euro is divided over different product groups. The pie-chart below illustrates this division. 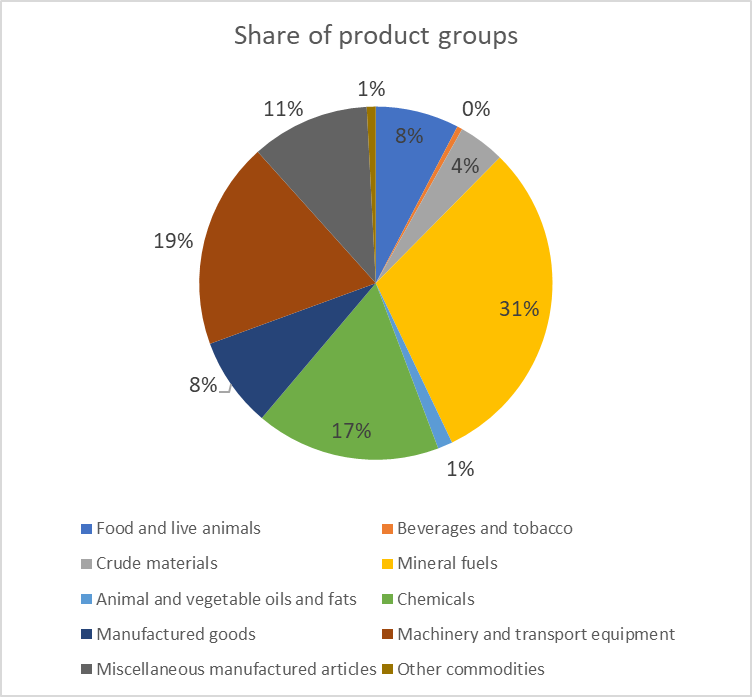 The increase in export of mineral fuels is the largest, this concerns the trade and export in oil, gas, electricity and coal. The traditional Dutch export sectors are clearly represented in the figures. Food and live animals relate to the substantial Dutch agricultural and food sectors that are very export minded. The same holds for Chemicals. The various manufacturing industry (maakindustrie) products (Manufactured goods, Machinery and transport equipment and Miscellaneous manufactured articles) are well represented. At large this is in line with the traditional export structure of the Netherlands.